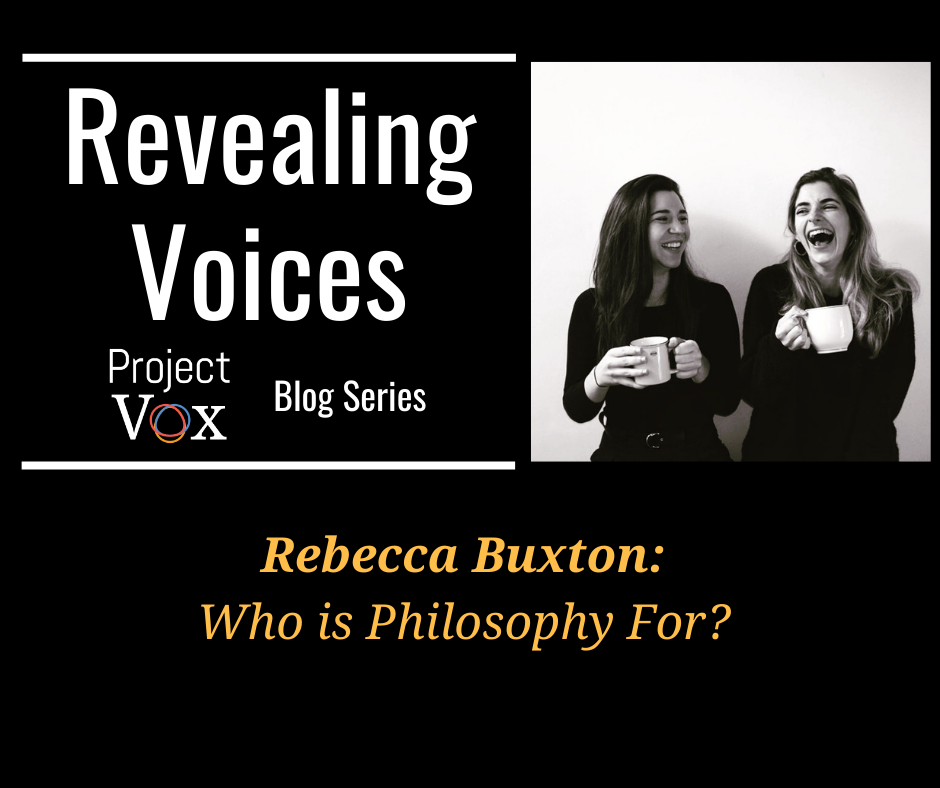 This post accompanies the publication of The Philosopher Queens, a crowd-funded book edited by Rebecca Buxton and Lisa Whiting. The mission of this book, like that of the Revealing Voices, reflects a need to share stories and ideas of women philosophers and the collaboration of women in scholarship. Although this book is a collaboration between Lisa Whiting and Rebecca Buxton, this post is from Rebecca’s perspective. Rebecca’s post is part of our Revealing Voices blog series.

When I finished my undergraduate degree in Philosophy, I had studied no women philosophers. Some appeared occasionally on each syllabus – I remember Julia Annas in Greek Philosophy and Judith Jarvis Thomson in Ethics. These women were never given any individual fanfare. They appeared without any attention being paid to them as figures worth thinking about in the broader history of philosophy, unlike the individual men whose lives and work philosophy students learn about to exhaustion: Plato, Aristotle, Augustine, Hobbes, Locke, Rousseau, Hume, Berkeley, Nietzsche, Hume, Marx, Rawls, and Nozick, to name only a few.

I filled in the gaps with my imagination. I was so sure that Hilary Putnam was a pioneering woman in the philosophy of mind, until I realised in my final term that he was another male voice among many. It was far worse for non-white voices, who were – as far I can remember – rarely included at all.

I’m disappointed that, to be totally honest, I never properly questioned this absence. I knew from my first encounters at university that philosophy was an elite sport. A subject associated with privilege, practised mostly by those we went to private schools and also studied Greek, Latin, and Classics. No such subjects were taught at mine and Lisa’s school. The philosophy course was discontinued the year after we left and the term before our final exam was taught by a geography teacher reading from the textbook at the front of the class. When I managed to get a place studying philosophy at university, then, I assumed that my teachers knew better than me, and that surely if women and non-white philosophers had existed, we would be studying them.

We know now – and indeed many knew all along – that there is a hugely rich history of philosophy that remains almost entirely ignored by most philosophers. Most philosophy departments are starting to take this seriously, led largely by young scholars pushing back against the traditional models that they themselves were taught. 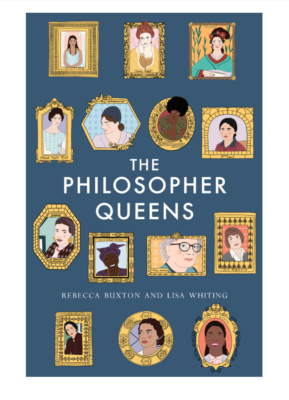 With The Philosopher Queens being published this week, people often ask me and Lisa what our motivation was for creating the book. Although we’ve had an overwhelmingly positive experience bringing this project to life, our primary motivations were certainly frustration and anger. If women philosophers existed and in fact had been doing philosophy for just as long as men, why had we never been told about them before? It has been the honour of my life to work on this book, but I still wish that it had existed for me when I was sixteen and crammed into my first philosophy classroom, scared that I wasn’t cut out for the road ahead.

We know from women philosophers writing today, like Amia Srinivasan and Myisha Cherry, that anger can be a tool for good. Here, our aims are small – women, queer people, and people of colour need to be included in our philosophy. More radical overhauls are needed in philosophy of course – many of the ingrained methodologies and traditions that have been developed and perpetuated continue to the exclude some from being considered “legitimate” philosophers. Angela Davis is more often called a historian despite her deep engagement with core concepts in political philosophy, and Elizabeth of Bohemia who corresponded with Descartes is regarded as a “learned lady” at best. There is much left to do when thinking about who counts as a philosopher, a subject which requires grappling with an original philosophical question: what is this philosophy thing anyway?

In her final book What is Philosophy For? Mary Midgley continued her life-long critique of philosophy as an abstract exercise. She was consistently frustrated by the failures of philosophy to engage with the real world, and to take place with such jargon that no non-philosopher could ever hope to engage in it. Instead, Midgely argued, philosophy should be accessible to the general reader. Importantly, it should help us to understand the world that we find ourselves in (and the world of problems that we also create).

I think, in doing so, Midgley was also asking and answering the question of who philosophy is for. If we lament the existence of philosophy in locked away rooms spoken in languages that almost no one understands (myself included), then we already accept that philosophy should be for everyone. A more expansive understanding of who is a philosopher and what philosophy is will help us to get to a more inclusive philosophy that everyone can engage with. But recognising the women and people of colour who have been doing philosophy all along can also help to make our subject more democratic.

The Philosopher Queens is by no means exhaustive and there’s such a long way left to go. Lisa and I have learnt a huge amount over these past two years, more than enough to make up for everything that was left out by our undergraduate degrees. I’m still angry at the state of philosophy, but I’m more hopeful than ever that we’re getting there.

Rebecca Buxton is a DPhil candidate at Oxford University, studying political philosophy and migration. Lisa Whiting works on public policy and ethics and is studying for an MSc at Birkbeck University. Please follow them on Twitter: @rebeccabuxton @lisawhiting_