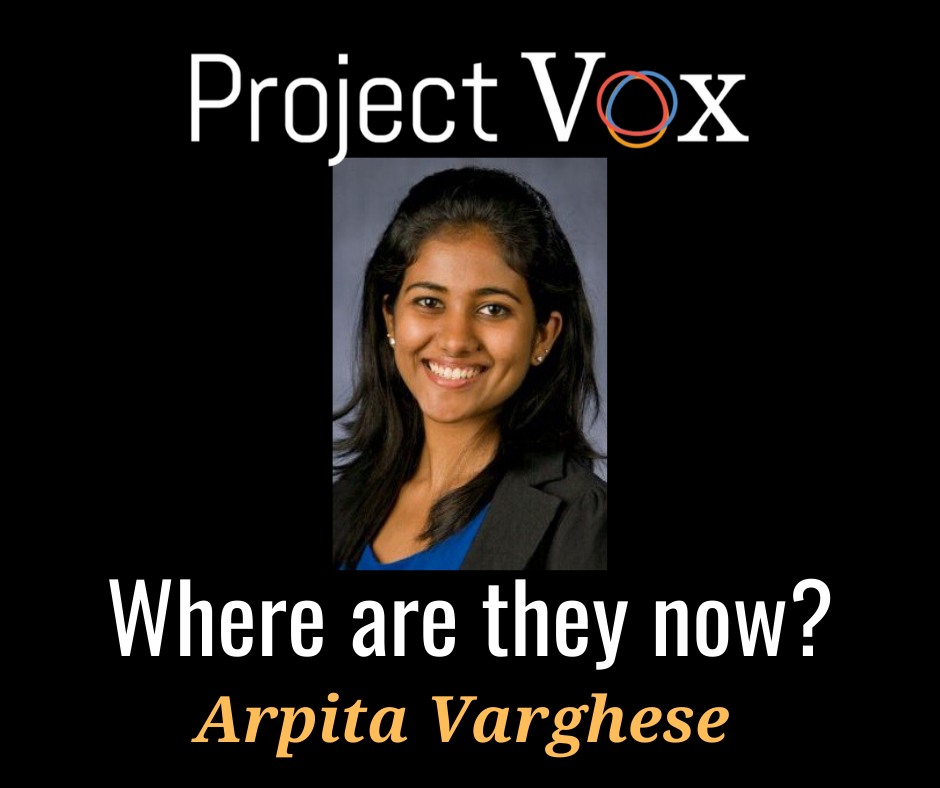 Arpita Varghese is currently the Gender and Humanities Action Analyst for UN Women. She completed her BA in Global Studies at Duke University in 2015, and her MSc in Global Governance and Diplomacy at the University of Oxford. While at Duke, Arpita assisted Project Vox with various research on women philosophers.

This interview is part of Where Are They Now? blog series, where we catch up with alumni of Project Vox and discuss their experience with the team as well as their current works.

Roy Auh: Thanks for sitting down with me today, Arpita. To begin, could you introduce to us to where you are currently?

Arpita Varghese: I currently work for UN Women, the United Nations Entity for Gender Equality and the Empowerment of Women. I work primarily with the humanitarian team at the UN Headquarters, which is involved with preparing for and responding to crises that are related to climate change, conflicts, or disasters, to name a few. So I work at a country level with the country offices to support their frontline response, as well as on a global level through policy work on issues such as accountability, where we ensure that states are accountable for making sure voices are heard and the leaders are enabled to champion women and girls. And I’ve been doing this for four years.

RA: This is a very important work that you’re doing. I’m afraid to sound opportunist here, but it also sounds like there is some connection with Project Vox in terms of working to make women’s voices heard at a broad level. Could you speak a little bit about that?

AV: Retrospectively, it does look as if my time with Project Vox and now UN Women converged into a complete narrative. I knew I wanted to study philosophy coming into college, and I did, on top of double majoring in International Comparative Studies. I also participated in summer programs such as DukeEngage that was related to women’s status issues, citizenship, and rights. Of course, I didn’t know this would all fit so nicely when it was happening.

But I joined Project Vox my senior year, after I’ve already finished my major requirements for philosophy. When I came back from my junior year study abroad, I saw that Prof. Janiak was teaching a “History of Modern Philosophy” course that included women philosophers in the syllabus. Though I already took that class abroad, I asked if I can audit his class. He welcomed me, and also asked if I would be interested in this brand-new project he is involved in called Project Vox. So I went to the first couple of sessions, and that’s how I got started.

Project Vox back then wasn’t so established as it is now. It did already have a website when I joined, but that was it. I joined when they were discussing how to work out an interactive timeline, which is something I was pretty excited about. I worked with Project Vox full-time after I graduated, and my work with them involved working on du Châtelet and Masham entries, supporting the research and drafting some introductory sections.

What I was most fascinated about was that even though I had already finished my philosophy major, and even took philosophy classes outside United States, there were these women that have contributed so much to philosophy that I have never heard about. It was like a whole new world to me. I think that’s the premise where Project Vox is doing something very valuable and needed, to invigorate the voices of these important women philosophers that even someone who has studied philosophy never heard of.

RA: So at the time you didn’t realize it, but combined with your interest in social issues through ICS and DukeEngage, how do you think Project Vox helped with your current work?

AV: I think it helped me develop techniques of presenting the value of your work to people outside of your inner circle. The ability to communicate what you do, share it, and have it reach multiple audience is a skill I regularly tap into now.

At the time, Project Vox was designed primarily for professors and other academics. It did not consider accessibility for undergraduates and non-academics as much as it is now. But the team was definitely developing ways to be more accessible to a wider audience when I was there. So there were quite a few discussions about what undergraduates might be looking for in a resource like this, and how we can target that such segments of an audience. As in, how do we communicate the value of studying forgotten early modern women philosophers to anyone from undergraduate students to professors to people outside of the academia?

That’s not just a visibility and popularity issue, but also have connotations related to funding and mobilizing resources, which is something that is pretty heavily related to what I do right now. Being able to communicate the value of your work to non-expert audience is so integral to raising the resources needed to continue your work. That’s something I do right now with UN. As we are held accountable to donors, our partners at a local, governmental, and global level, and our constituents, we must be able to communicate the value of our work to them while the resources are constantly limited. It’s not just doing the work but also capturing the value of our work.

AV: Two thoughts: One, it is a question of whose voices are you paying attention to, whose experiences are being captured when history is written down. This is something that directly shows up in my work today. It is a matter of whose voices are heard when peace agreements are signed or when response teams are deployed, when camp management committees are set up in refugee camps. Our guiding questions are whether women are included in the decision making body, and whose realities are you capturing when you are serving? This larger principle of leaving no one behind is the main commitment of my work as it related to UN’s Sustainment and Development goals, but I can also identify it in what Project Vox does. Perhaps that is what resonated with me.

Two, because your thoughts are informed by your own reality, it is all the more that we include perspectives from different people. For example, the mind-body problem was only possible because Princess Elisabeth responded to Descartes and she was able to give a perspective that is informed by her place in the world that is though privilege, still from a woman at a time when men and women were not equal. There is a strong value of adding multiple voices to be captured in the narrative by its capacity for greater complexity and sustainability. That’s something that goes beyond philosophy. In general, peace agreements are more successful when more voices are considered. Diversity should be part of any process – it’s not only the right thing to do, but also a smart thing to do.

Roy Auh was the Outreach & Assessment Coordinator for Project Vox. He also served as the Lead Researcher for Princess Elisabeth and Anna Maria van Schurman cycles. He recently graduated from Duke University with a bachelor’s in philosophy, literature, and music.