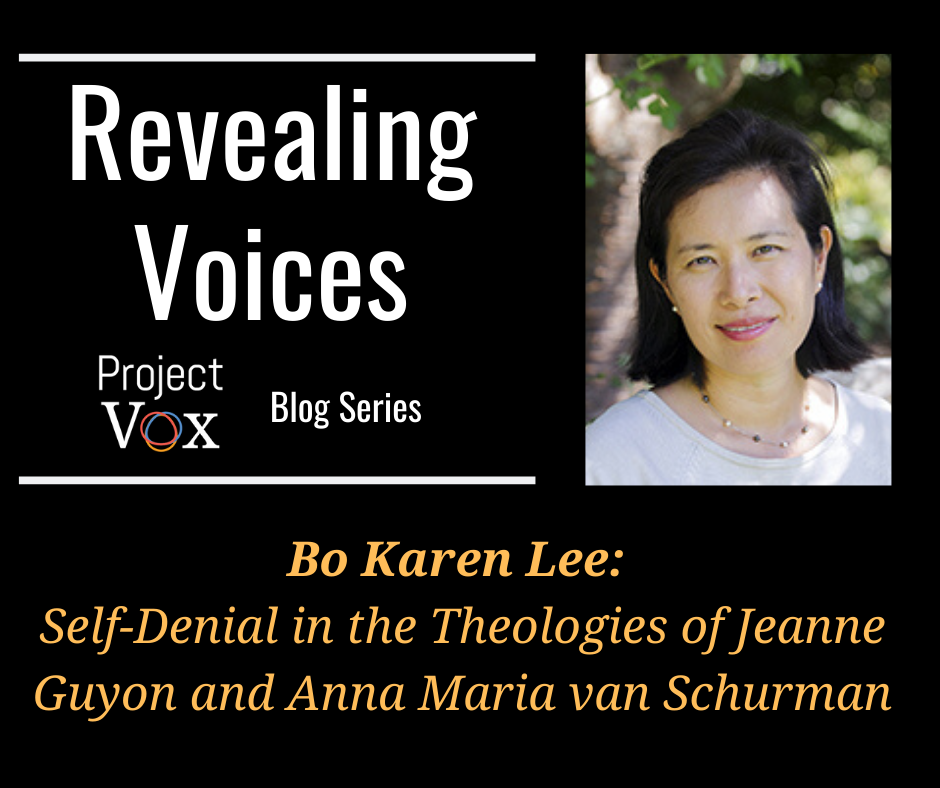 Roy Auh: How did you first come across not just one but two early modern scholarly women, Jeanne Guyon and Anna Maria van Schurman?

Bo Karen Lee: When I was in seminary, someone in my church was reading Jeanne Guyon’s Experiencing the Depths of Jesus Christ (1685). She then handed it to me, and reading it out of my own personal interest, I became intrigued by this curious figure. I soon discovered that she was important for many historians and that complex political circumstances surrounded her life. She was at first well supported by the court and was a spiritual advisor to Madame de Maintenon [the second wife of King Louis XIV], but then she lost their favor and was condemned by the king in 1694 as well as the Catholic church. However, Protestants and other major figures like Schopenhauer and Kierkegaard were very interested in her. The retrieval and preservation of her work were done by a Dutch Protestant, and she remained influential in Protestant circles for a long time after. But, very few had studied her theology in depth, because people were more interested in her political controversies. So I was interested in her theology which had been left un-researched. I later wrote a paper on Guyon’s theology during a summer course @ Regent College in Vancouver, British Columbia.

Then during my PhD, my professor pointed me to Anna Maria van Schurman, a reformed Calvinist, in order to complement my interest in Guyon’s theology since I was at a Reformed institution. So I read The Learned Maid (1659), an old English translation of her Dissertatio (1641), and parts of her autobiographical Eukleria (1673), which was in Latin. (Not much of her work has been translated, which I think is the main reason behind her current obscurity.) When I was reading the Eukleria, however, I noticed that she wrote about self-denial in order to “enjoy God,” which was similar to the “self-annihilation” that Guyon wrote in her works. That was an interesting connection. So I followed my instinct and searched to see if they had any further connection between them. It turns out that the Dutch Protestant who preserved Guyon’s writings, Pierre Poiret, was also corresponding with van Schurman! Moreover, van Schurman joined the Labadists later in her life, which was a sect led by Jean de Labadie, a former Catholic and Jesuit, and later Calvinist. That kind of Protestant connection yielded more overlap as well. It was a seed of instinct that made me wonder if there might be some kind of resonance between these two women who were writing 30 years apart, across France and Holland, so to find such a genuine connection was very exciting.

RA: That instinct led to your book on the theologies of both Guyon and van Schurman. In the preface of that book, you draw an interesting parallel between the self-realization they experienced in the 17th century and the kind of self-realization happening today in contemporary feminist movements. Can you speak more about that?

BKL: I grew up in a Christian environment where we were taught to deny ourselves for others and for Christ. This is now a tricky issue for women because of its frequent abuse, but it is still part of the gospel. To deny ourselves in that context is to live for the greater good, for God.

So, are feminist movements today exempting women from denying themselves for that greater good?

I wanted to look at these two women who wrote about this issue, to see if there were any insights universally applicable across the centuries. Of course, one has to be very careful about misappropriating certain views to different situations. I wouldn’t want to wrongfully apply Guyon and van Schurman’s process of self-surrender to all women’s situations today without discretion or discernment.

Take Anna Maria van Schurman, for example. Her later writings displayed much more confidence and power when she surrendered herself towards God. In her late 30s, when she was given the responsibilities of caring for her aunts after her mother passed, she realized that despite all her learning as a theologian, she did not experience genuine love for others. Her theological studies were ineffective in changing her heart. It was through this lack of love in her inherited acts of charity that she began to feel disillusioned with her academic past.

Then, she found that Jean de Labadie’s sermons had stirred her heart more than her previous theological studies. So, she abandoned academic theology as her primary enterprise and joined the Labadists, finding this new life to be the better path. Her autobiographical treatise, Eukleria, outlines and defendes her choice: “Eukleria” means the better fortune, the better thing, as described by Jesus in Luke 10:42, explaining to Martha how Mary had found the better path.

In her later writings, after van Schurman left life in the academy, we find that she writes with more power and confidence than in her earlier years. Previously, she was celebrated by others for her “female modesty,” and she seemed to apologize to her male mentors for her “lowly female” status. But when she left the academy in favor of the Labadists, she writes with authority, filled with confidence. This is an interesting turn, because this confidence was given to her, according to her own account, through her practice of self-denial. Having emptied herself of self, so that she could be filled by God, she was able to enter a much larger reality. She describes it as becoming a drop of water in the ocean of divinity. In a surprise twist of sorts, she found herself more deeply through self-denial.

So in the end, van Schurman can be an inspiring figure to be more deeply find oneself. But in order to do this, you must empty yourself first, so that you can be filled thereafter.

RA: It’s incredibly fascinating to learn how the works by women of centuries past can provide such inspiring insight on the conditions of women today. It’s already clear what kind of intellectual value studying them have, but one could add that their ability to speak to the present is one of the more efficacious values of re-discovering these previously silenced women, who have so much to say.

BKL: Absolutely! Feminist concerns of today shed light on the value of studying important figures such as Guyon and van Schurman. In their case, they demonstrate how denying ourselves can be done for the sake of a greater Good, and not out of weakness, timidity, fear or shame. Disciples of Christ are called to deny themselves, but with an eye toward our deeper human dignity, power, and purpose. We benefit greatly by reading the past in conversation with the issues and challenges of today.

Bo Karen Lee, ThM ’99, PhD ’07, is associate professor of spiritual theology and Christian formation at Princeton Theological Seminary. She earned her BA in religious studies from Yale University, her MDiv from Trinity International University in Deerfield, Illinois, and her ThM and PhD from Princeton Seminary. Her book, Sacrifice and Delight in the Mystical Theologies of Anna Maria van Schurman and Madame Jeanne Guyon, argues that surrender of self to God can lead to the deepest joy in God. She has recently completed a volume, The Soul of Higher Education, which explores contemplative pedagogies and research strategies. Before joining Princeton faculty, she taught in the Theology Department at Loyola College in Baltimore, Maryland, where she developed courses with a vibrant service-learning component for students to work at shelters for women recovering from drug addiction and sex trafficking. She now enjoys teaching classes on prayer for the Spirituality and Mission Program at Princeton Seminary, in addition to taking students on retreats and hosting meditative walks along nature trails.