Reference material on our site is written and compiled primarily by the Project Vox editorial team and undergoes rigorous review by the principal editor prior to publication. If you are interested in translating, transcribing, or conducting original research for the Project Vox site, please contact our editorial team at projectvox@duke.edu for a consultation before proceeding.

Translations are welcomed from qualified individuals with expertise in the source and target languages and knowledge of the subject area. Contributors will be asked to submit their finished translation, along with a copy of the transcription they are referencing, to the Project Vox editorial team. After undergoing preliminary review by the Project Vox editorial team, the translation will be reviewed by two or more internal or external referees, one of whom has expertise in both the source and target language and knowledge of the subject area, and one of whom is a native English speaker. The translation will be evaluated for fidelity to the source language, interpretation of the traits and dimensions of the source text, and readability of the translated text. Contributors will be credited as the primary translator, potentially with co-authorship with the Project Vox editorial team if edits to the text exceed a defined threshold, and asked to license their work under a Creative Commons Attribution license. If any significant changes to the translation need to be made post-publication, the editorial team will contact the primary translator for a consultation.

Transcriptions are welcomed from individuals with expertise in the source language. Contributors will be asked to submit their finished transcription, along with the original manuscript or a link to its digital manifestation, to the Project Vox editorial team. The transcription will be reviewed by two or more internal or external referees with expertise in the source language and reviewed for fidelity to the original text. Contributors will be credited as the primary transcriber and asked to license their work under a Creative Commons Attribution license. If errors in the transcription are found, they will be corrected by the Project Vox editorial team without consultation with the primary transcriber.

Teaching materials are welcomed from individuals with relevant subject area expertise and teaching experience. We ask that contributors make their syllabi as specific as possible by including text citations, pages for reading, discussion questions, lecture notes, and whatever other information might be applicable. The teaching materials collected by Project Vox are informally reviewed by the Project Vox editorial team for relevance and appropriateness. All contributors are asked to license their teaching materials under a Creative Commons Attribution license, so that they can be used by others in the classroom.

We are grateful to the museums, archives, and libraries who have given us permission to present their images here. For source and use permission, our default procedure is to use the phrase recommended by the institution providing the image. For open source, creative commons, and public domain materials, we do the same. When information about image provenance is not available, we provide clear tracks that you can follow back to the source. Below, we offer more background to why and how we conscientiously incorporate images on our site.

As a rule, scholarship in the history of philosophy tends to ignore visual culture. Historians of philosophy approach textual information with scholarly rigor. But when they use digital images to enliven a website or a PowerPoint presentation, they rarely subject the images to the same scholarly standards. The Vox team believes that this is a missed opportunity: a digital publication such as ours can present high-quality images that have been researched rigorously. The digital presentation of images is especially significant in the case of non-canonical authors. When students encounter a canonical author, such as Shakespeare or Descartes, they already have a conception of the author’s historical position and importance, one that may have developed over many years. But with a figure such as Cavendish or Masham, students will typically be encountering them for the very first time. It is therefore especially important to introduce students to these authors by emphasizing their self-presentation through a commissioned portrait, a frontispiece, or a title page. An author’s decision to place a notebook with a geometrical diagram in front of her in a commissioned portrait, or her choice to remain anonymous in a published treatise, is crucial for students to understand. Such decisions helped to shape the reputation of these authors. That is why Project Vox has made the presentation of these aspects of visual culture central to its work.

The Project Vox site has another pedagogical goal, one that may serve as a model for other disciplines that have not typically focused on visual culture. We aim to help students become savvy consumers of digital images. In disciplines such as philosophy, which has largely ignored visual culture, the digital presentation of images—including everything from photographs of portraits to digital facsimiles of books—is rarely held to the standard used for the interpretation of literary works. Whereas instructors always teach students to distinguish between the first and the second editions of a text, say, or between its Latin original and English translation, they often enliven their classroom discussions with web-based images of obscure origin. This is doubly problematic: first, without supporting information, a student cannot trace the image back to its original source; and, second, numerous images available on the web are misleading at best. For instance, a Google search for portraits of Lady Masham will lead students to the faked portrait of her, which was most likely produced during the early twentieth century. Students must learn to be savvy when interpreting these images and also the narrative of the author that they convey.

To achieve this pedagogical goal, the Vox site follows two rules. First, we present extensive source information for all of our images, guiding students in understanding their origins, their reproduction, and especially the role that they played in establishing, or undermining, the philosophical reputations of our figures. Second, whenever possible, we do not rely on digital clearinghouses and mass digitization projects, which favor quantity over quality and often have degraded scans because of poor source material (such as microfilm), inferior scanning equipment, or a lack of attention to detail. Improved technologies are making it easier to produce high quality scans such as are now available in Gallica, Hathi Trust, the Internet Archive, and in other library initiatives. Whenever possible we ultimately rely on images of the primary sources themselves, which helps to convince students that second-rate, degraded images are no substitute for the real object in the archive. This also provides a cautionary note to the sometimes utopian-sounding rhetoric accompanying the digital dissemination of historical information, rhetoric that can convince impressionable students that travel to remote archives is irrelevant in the digital age.

To illustrate the details of our methodology in action, we have presented some case studies below.

In Voltaire’s famous Elémens de la philosophie de neuton (1738), there is an important frontispiece depicting Newton, Madame Du Châtelet, and Voltaire himself. We find a highly gendered image of Châtelet holding a mirror to reflect the light emanating from Newton and the heavens down to the author, who writes on a desk filled with books and papers. This depiction, published just two years before the first edition of Châtelet’s magnum opus appeared, helped to shape her reputation as a mere expositor of Newton’s scientific and philosophical ideas. This case illustrates another point: a quick Google search will uncover a link to the full text, but one in which the famous frontispiece does not appear. This initially puzzled our team. We eventually discovered the following: whereas the Google Books version of the text represents the Paris edition from 1738, the frontispiece appeared only in the Amsterdam edition of that year. Yet this fact isn’t evident from Google Books, which simply reproduces one version of the text with no discussion of its provenance, so its users have no reason to think that they are missing important historical information. Such cases illustrate the importance of resources that present images within the proper historical and philosophical context. 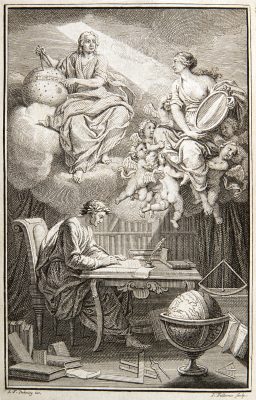 From the literature on the subject we know that there were at one time two portraits of Damaris Masham. One was among her mother’s possessions; the other, painted by Sir Godfrey Kneller and commissioned by John Locke, was a companion piece to his own portrait. Both appear to be lost. A web search of Damaris Masham yields one image that is highly suspect. The image offers no information substantiating the claim that it represents Masham. There is no artist identified, no date, no location, and no provenance. Furthermore, the style of painting, dress, and color suggest a more recent vintage. If it is an artist’s conception of Masham, why is that not made clear?

Case #3: The portraits of Du Châtelet

We were also surprised to find two versions of the painting of Madame Du Châtelet after Maurice Quentin de la Tour. One is a detail in Wikipedia which links to the ancestral home of the Du Châtelet family, the Château de Breteuil. We learned of this from the article about our project that appeared in the Washington Post. We discovered that the painting held at the Château is not the one shown on Wikipedia. While we gleaned useful information from the web, we found it was at times misleading or incorrect. The large images of Du Châtelet’s portrait which appear on our home page and main philosopher page are sourced from the Château Breteuil.

There is some disagreement about the identity of the figures in two paintings by Samuel van Hoogstraten: “Perspective View with a Woman Reading a Letter” and “Perspective Portrait of a Young Man Reading in a Courtyard.” Alternatively they are identified as Ann Conway and John Finch. We know John Finch commissioned portraits by this painter. That fact, the similar architectural details, and the presence of the little dog, argue in favor of the position that these paintings do represent the people we take them for.  Our aim is to have historically accurate images and to make reasonable accommodations for what we do not or cannot know.

For two of the women presented here there are numerous paintings and engravings.  There are at least three portraits of Du Châtelet and numerous engravings. The same is true of Margaret Cavendish. There are many portraits, some disputed, and many engravings which feature her likeness. Ann Conway and Damaris Masham, on the other hand, have left behind fewer traces of their likenesses. This lack ties into our theme of giving voice to these figures who have been sidelined, and in some cases, all but forgotten.

The frontispiece of Christian Knorr von Rosenroth’s Kabbala Denudata (1667) is a good example that shows the value of high quality images and engravings. In our research we found that many images and engravings such as Kabbala Denudata are rich in details that get lost in low quality images with a lower DPI-rate, which in turn leads to blurriness. The high-resolution frontispiece from the Kabbala Denudata featured here has bright and clear colors and by zooming-in one is able to see many small details like writing and a ship in the background. We think these details provide valuable historical information which can be important regarding the frontispiece when viewed in context with the corresponding time period, artist or author. The higher DPI-rate makes the digital copy a better facsimile of the original printed text, and thereby provides greater authenticity.

For image sources and permissions, see our image gallery.