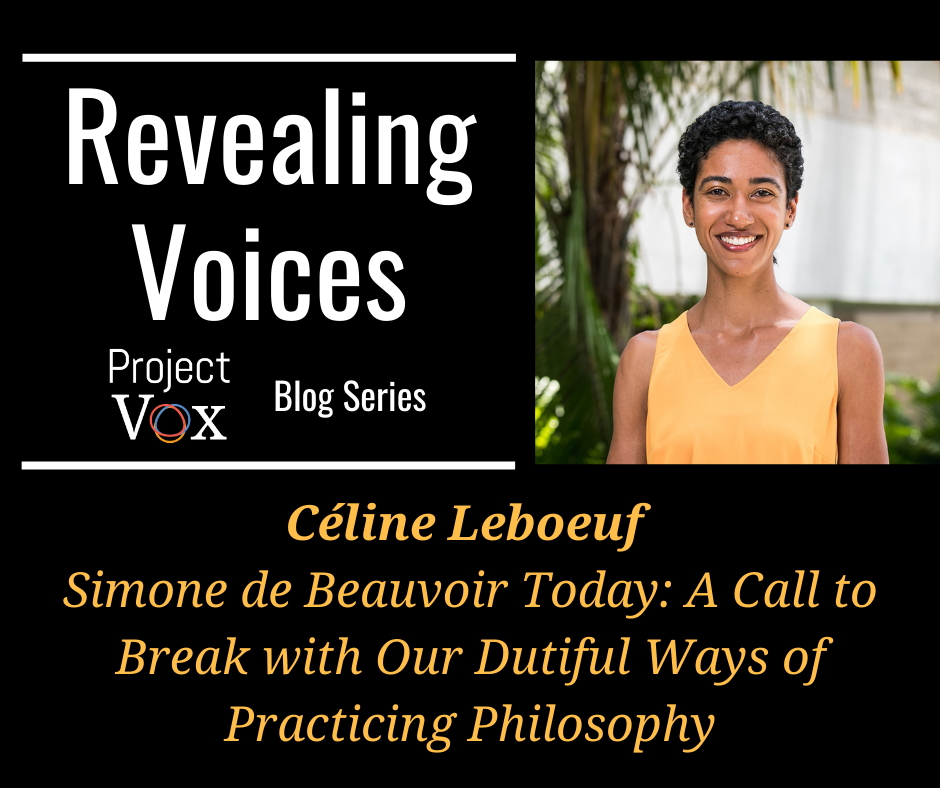 My introduction to Simone de Beauvoir was Memoirs of a Dutiful Daughter, the first volume of her autobiographies. The book answered the question that loomed large over my life at the age of sixteen: What next? Like Beauvoir, I was a high-achieving student. But as high school drew to a close, I wondered what path my adult life would take. College would not be the same as high school: I would have to choose a major and eventually a career. I had planned to go on in the sciences. Beauvoir’s passion for philosophy laid the ground for a life-altering change.

Beauvoir’s statements are telling. She was not a system builder in the way most philosophers are. Her essays are not disinterested inquiries into abstract topics such as the nature of time or the notion of justice. Nor do they cohere to present a unified account of reality as a whole. For example, descriptions of the lives of women are knitted together with philosophical references throughout her groundbreaking feminist treatise The Second Sex. Moreover, Beauvoir put herself into her works. The Second Sex opens with the line: “I have hesitated for a long time to write a book on woman. The subject is irritating, above all for women; and it is not new.” A few pages later, when Beauvoir raises the question “What is a woman?” she notes that her very asking this question is significant. A man would not question the place men occupy on earth. Being a woman is a particularity, being a man is not.

Beauvoir’s memoirs recount a life full of romance, far-ranging travel, political activism, and artistic engagement. In addition to her relationship with Sartre, she had affairs with other literary figures, most notably, the American writer Nelson Algren. She gave lectures in Portugal, in the United States, and in Japan; she traveled to Russia, Cuba, and Brazil at the height of her fame. She defended abortion rights in France when abortion was illegal, distributed banned leftist tracts at the risk of being imprisoned, and participated in the Russell Tribunal, which investigated American military intervention in Vietnam. Picasso and Giacometti were her friends, and she met with Che Guevara and with Fidel Castro. If I could live in the shoes of a famous philosopher for a day, Beauvoir would be my choice. Her life was far more interesting than most in the discipline.

I have had the opportunity to teach Beauvoir as a graduate student and now as a faculty member, and my lectures devoted to The Second Sex have met with resounding success. Instead of theorizing about the nature of gender in a vacuum, as the accounts of many later feminist philosophers have done, Beauvoir invites my students to imagine the lives of women in the first half of the twentieth century. We discuss her analysis of girls’ relationships to their dolls, and ponder its continuing relevance. We argue over the meaning of her iconic line, “One is not born, but rather becomes, a woman.” Does this statement imply a distinction between sex and gender? If so, why would this distinction matter? Does it help make sense of the lives of transgender persons? We debate her account of feminine narcissism, and explore how women continue to be seduced into objectifying themselves, especially by the fashion and beauty industries. When I taught Beauvoir as a graduate student at Harvard, the course blog was flooded with responses. And when I began at my current institution, Florida International University, one student remarked that the Beauvoir lectures gave my course on Existentialism new momentum. Of course, students pick up on my enthusiasm for her, but this bias cannot account for everything. Beauvoir speaks to my students today.

We philosophers need to teach more figures like Beauvoir. We are only beginning to change the curriculum in undergraduate education in philosophy: courses on gender, race, sexuality, environmental philosophy, and other timely topics, are being put on the books in universities across the country. We should animate the classroom topics that are likely to be more socially relevant or personally meaningful to our students. More than that, we need to philosophize as Beauvoir did—not in the form of dry treatises, but in essays that combine personal reflection and big-picture questions.

More than anything, we need to lead Beauvoirian lives. I’m not saying that we each need a transatlantic lover, but rather that we can aspire to occupy more important roles in public discourse! Intellectuals play a role in public debates in many countries, especially in Europe. Even in the United States, columns in The New York Times and other journals have featured interventions by philosophers on timely questions. But for their contributions to be heard, we need to educate new generations to be receptive to their ideas. Professional philosophers in the United States are increasingly sharing their work beyond the ivory tower; for this endeavor to be successful, we should philosophize a way that is just as attuned to our personal strivings as to our collective struggles. Nothing could be timelier in an age of widespread skepticism about institutions such as journalism and higher education.

Beauvoir titled the first volume of her autobiography Memoirs of a Dutiful Daughter because she was a model daughter: obedient to her parents, pious at a time when piety was required, and devoted to her studies. But, towards the middle of the volume, we witness a break: Beauvoir realizes she no longer believes in God. Her atheism was the outcome of a long process of personal and intellectual reflection. This break marked the beginning of Beauvoir’s emergence as an independent thinker. So, philosophers, if we are to think anew, let us break with our dutiful philosophizing.

Céline Leboeuf is an assistant professor in the Department of Philosophy at Florida International University. Her research on embodiment lies at the intersection of the critical philosophy of race, feminist philosophy, and phenomenology.Her recent publications include “Simone de Beauvoir’s Feminist Art of Living,”“Anatomy of the Thigh Gap,” and “The Embodied Biased Mind” in An Introduction to Implicit Bias (eds. Erin Beeghly and Alex Madva). Please follow her on Twitter: @soulfulphilo