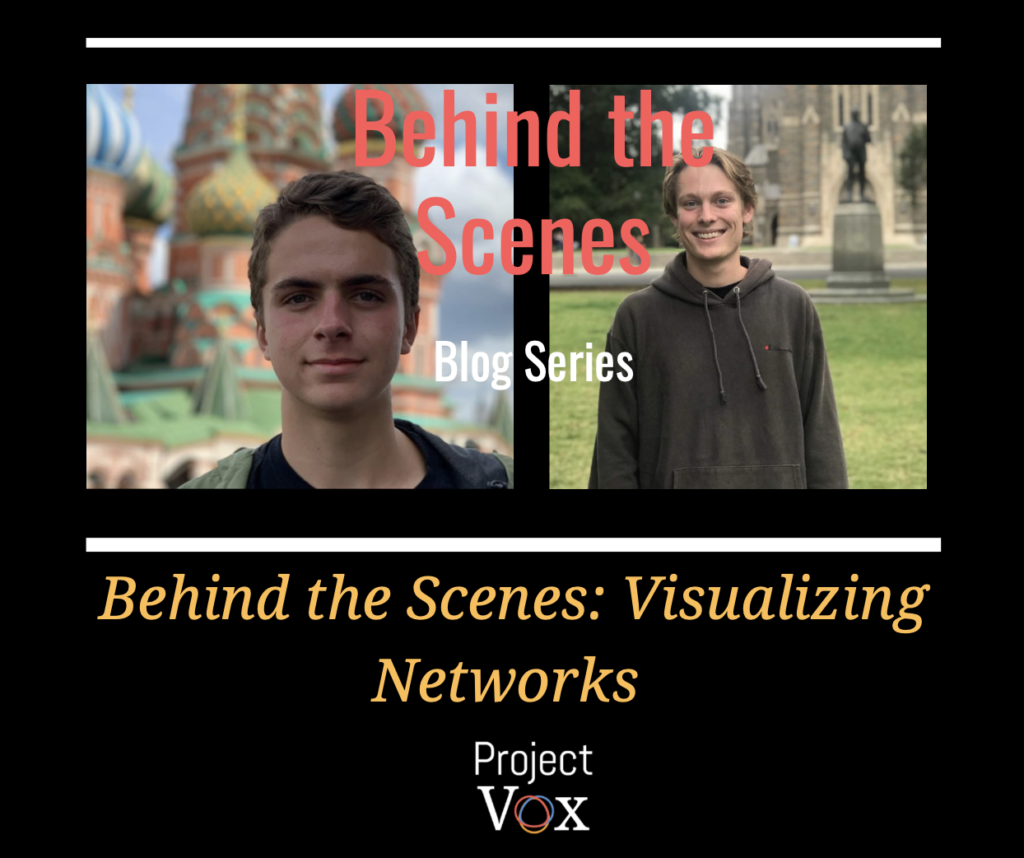 Jackson Cooksey and Tristan Kelleher’s post is part of our Behind the Scenes blog series.

The hope in creating these kinds of visualizations is threefold. Firstly, they are an intuitive way to convey complex information. A large portion of every research project that Vox undertakes involves uncovering and documenting a philosopher’s correspondence. This information takes the form of spreadsheets or tables with long lists of people and letters. While this format is great from a research perspective, it is hard to fully grasp the scope and importance of networks that develop around the figures we study. Networks show this information in a concise and visually appealing way.

Secondly, we thought that networks would make a good addition to the website from an interdisciplinary perspective. Colleagues on the Vox team bring different disciplinary skills and knowledge, beyond just conducting humanistic research. By making network visualizations part of our team’s regular work, we provide more opportunities for students working in such fields as math and computer science to contribute to a digital humanities project.

Lastly, we hoped that network visualizations would simply be an interesting addition to the website. For example, it is one thing to say that Mary Shepherd had a large and influential social circle, but visualizing those connections in a network map makes her social influence much more real.

When visualizing philosopher networks, data selection is tremendously impactful on the final product. Without a clearly defined scope and method of standardizing data, a future visualizations team would become quickly overwhelmed, simultaneously wondering what forms of data warrant visualization and how to respond to substantial absences of data for philosophers that are known to be well connected. As a result, we drafted visualization team workflows that primarily use correspondence data to identify connections and their strengths. While documenting a simple and sustainable process of data acquisition and standardization, we recognize and recommend future workflow additions that include more types of data (beyond correspondence) as well as visualizations with geographic and temporal components.

The members of our team were also involved with other tasks for Vox this semester, so, while we were doing our planning and goal setting for the semester, we attempted to emphasize efficiency in order to make sure that we could follow up on all of our commitments. To do this, we made sure to set concrete and attainable goals along the way. Emphasizing consistent communication and detailed documentation habits, the visualization subteam made intentional efforts to keep team members on the same page, as well as informing the other members of Project Vox of our progress and roadblocks.

Preempting the chaos and turbulence of a remote semester, we crafted a project plan that outlined communication norms, deliverables, project scope, and timelines. While drafting the project plan under the guidance of Liz Milewicz (Project Vox co-lead) and Will Shaw (Project Vox technical lead), we quickly realized the delicate balance of ambition and efficiency that must be maintained when performing a feasibility study. Through biweekly check-ins with both Will and Liz, and an update presentation to the Project Vox team halfway through the semester, we had ample opportunities to ask questions, think about the big picture, troubleshoot problems, and create smaller deliverables.

After performing research for the Lady Mary Shepherd entry for over a year, the feasibility study forced us to think in a much different way about both philosophy and Project Vox. Instead of compiling as much information as possible (like we would for a philosopher entry), we were now tasked with creating a model for effective scholarship well into the future. To effectively perform this new form of research, we had to think critically about the pragmatic and thematic scope of the Project Vox team and mission. Our final deliverable was a feasibility statement where we recommended the continuation of a networks visualization team, outlining potential team workflows and visualization tools.

Jackson Cooksey is an undergraduate double majoring in Economics and Philosophy and minoring in Russian Language. He was on the Mary Shepherd research team for Project Vox as well as the Visualizations sub-team.

Tristan Kelleher is an undergraduate studying Art History and English at Duke University. He contributed to the Lady Mary Shepherd entry and currently works on the Visualizations sub-team.