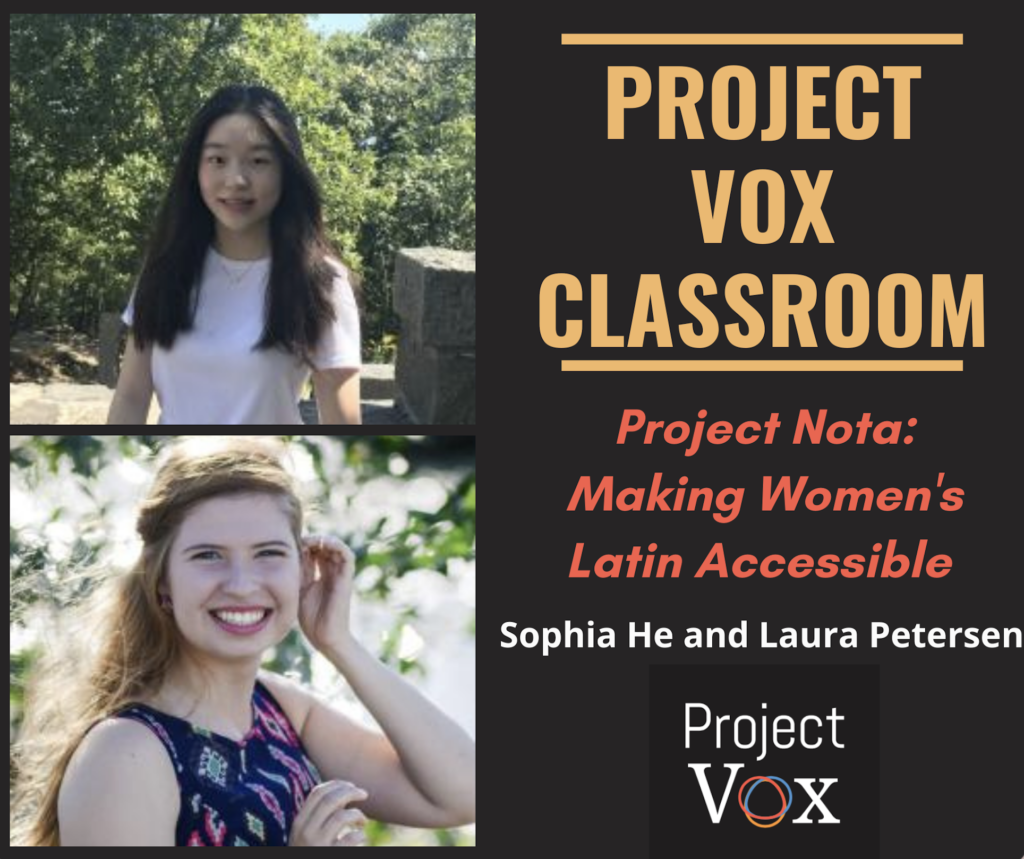 Sophia He and Laura Petersen’s post is part of our Project Vox Classroom blog series.

What is Project Nota’s Story?

In a conversation with my friend Skye Shirley, founder and executive director of Lupercal, a reading group for women and gender non-binary Latinists, I learned about Laura Cereta, a 15th-century Renaissance humanist. She was the first female humanist and the first female Latinist I had heard about. With curiosity, I read an English translation of her work: Collected Letters of a Renaissance Female Feminist.

I was instantly drawn to her words and amazed by the interconnectedness she revealed between her mundane life–scrubbing toilets, weaving needlework, and arguing with friends–and abstract philosophical ideals of relationships and education. Her detailed descriptions of household chores were from a female’s lens, starkly different from a male’s around her time. Additionally, she raised the idea that women should have the right to education, an idea that was famously expressed by Mary Wollstonecraft around 200 years later, contributing to the development of feminism. Both Cereta’s unique weaving of everyday life into humanistic ideas as well as her contribution towards feminism are examples of the value her work possesses.

In addition, the existence of Laura Cereta completely overthrew my conception of Latin. Her work is an example of the continuation of the Latin language and the culture it represents through to the Renaissance period and exemplifies the crossing of time and space which is allowed through language. As written by Brian Friel in the play Translations, “…that it is not the literal past, the ‘facts’ of history, that shape us, but images of the past embodied in language.” But, even though the importance of Latin will always exist in that sense, the same use of the Latin language has not continued through to the modern day. Though it is still studied, it was through English, not Latin, that I discovered Cereta, a demonstration of the harmony that the translation of an ancient language into a modern language can produce, a real-life illustration of what Friel also wrote, “But remember that words are signals, counters. They are not immortal. And it can happen – to use an image you’ll understand – it can happen that a civilisation can be imprisoned in a linguistic contour which no longer matches the landscape of… fact.”

However, Cereta’s wisdom and Latin’s value were not what struck me the most. I discovered that her works were only published posthumously, and not only did they circulate only in manuscript form among male scholars around her time unclear whether with her consent, they are still to this day not completely published. After becoming familiar with other female Latin writers, I discovered that Cereta, in some ways, was actually fortunate, considering that Diana Robin, translator and editor of Collected Letters of a Renaissance Female Feminist, made it possible for me to read her work. Many women Latin writers are not translated or even studied in the original Latin. Even though there would be debate around every piece of writing in terms of how valuable it actually is, there is no doubt that these women contain some wisdom of the people before us, which, without the opportunity of being published, will have zero possibility of being recognized.

Through my involvement in Lupercal and sharing about my new foundings, I found that there are people out there who believe similarly in the value of female Latinists’ works that have not yet been recognized. With the thought of uniting the strengths of people and creating a community where this same belief can be shared, I started Project Nota.

This project draws attention (notā bene!) to the letters and works (nota) of famous women (notārum) by focusing on the digitization of texts, translating these texts into English, and increasing their overall accessibility. Nota means three things in Latin, which correspond to our mission statement:

As a young educator, I have found the intergenerational nature of Project Nota to be particularly empowering. I have received personal and professional support from the older members. The student members have brought in a wellspring of youthful optimism and advocacy, along with the practical insight of what students want to see in the classroom. Our guidelines for Project Nota lesson plans were written collaboratively by teachers and students. So, the guidelines include not only standards, learning outcomes, and ease of use, but also activities that interest students, multiple ways to engage with the text, and room for creativity.

In this intergenerational structure, I see parallels to the world of Renaissance and Early Modern female Latinists. In Women Latin Poets, Jane Stevenson describes an “educational tree” of generations of women handing knowledge of Latin down to their daughters and nieces. Even when Latinate women do not write treatises on the education of women, it seems that they saw its value in their own lives and wanted the same for the women and girls in their own family.

In addition to being intergenerational, our team of 22 dedicated members is international and from multiple linguistic, racial, and socio-economic backgrounds. We are currently translating not only into English, but also into Spanish and French. Our teachers teach at elite boarding schools and also Title 1 schools in communities experiencing high levels of poverty. These diverse perspectives all improve the reach and relevance of our work.

The projects of Project Nota, along with our goal of making female Latinists’ works more accessible, stand at the intersection point between Latin, history, feminism, and digital humanities. With the opportunities that technology provides, we are able to see the collision between STEM and humanities in this beautiful way. Not only is Project Nota coming from a social justice standpoint but also from the motivation to make our learning more comprehensive. We advocate for women’s voices by increasing the accessibility of female Latinists who have been largely ignored in the past and broaden curriculum by including women who both were influenced by and made history. In doing this, we write a history that belongs to us and the world we live in.

If you are interested in learning more about our work or introducing more female voices into your own classroom, please visit us at Project Nota. We are still a budding organization, but soon we will have resources not only for Latin teachers, but also for teachers of history and literature. The current authors we are digitizing, translating, and creating materials for include: a Flemish humanist and neo-Latin poet, Johanna Otho (c. 1549-1621); Martha Marchina, a 17th-century soap-maker and Latin poet; and Caterina Imperiale, an 18th-century Neo-Latin poet from Genoa. In the future, we hope to illuminate the work of many more women writers of Latin including Anna Memorata, Cassandra Fedele, and Project Vox-Featured philosopher, Anna Maria Van Shurman.

We enthusiastically invite you to reach out to us! Please write to: projectnotaforwomen@gmail.com

Facebook: Project Nota
Instagram: @projectnota
Twitter: @ProjectNota
Sophia He is a fifteen-year-old rising sophomore from Newton, MA. She enjoys reading works of classic authors, especially those by female Latinists. She believes that Latin works written by, for, and about women are not only meaningful because of the wisdom they contain, but also from the social justice perspective that they receive the same attention that other Latin texts do. Therefore, she founded Project Nota under Lupercal to wish to bring together a team and a community who are equally as passionate about this cause. As Director of Project Nota, Sophia works to foster community and communication in order to achieve the common goal of promoting women’s Latin writing.

Laura Petersen (she/her) is currently a middle and high school Latin teacher in Sandusky, Ohio, in addition to Assistant Director of Project Nota. Her Latin journey began in her beloved home state of Wisconsin at Wayland Academy. Stories have always been an integral part of her interests and identity. And, starting during her education at Wayland, her main fascination became the stories of the past that are told through ancient texts and artifacts. She loves the window into the past that Latin gives us, and she is passionate about throwing open that window to include as many voices as possible! While earning her BS in Secondary Education, Classics, and History at Vanderbilt University, she served as an assistant in the Classical and Ancient Mediterranean Studies Department. This role gave her experience in and passion for digitizing texts and facilitating research.