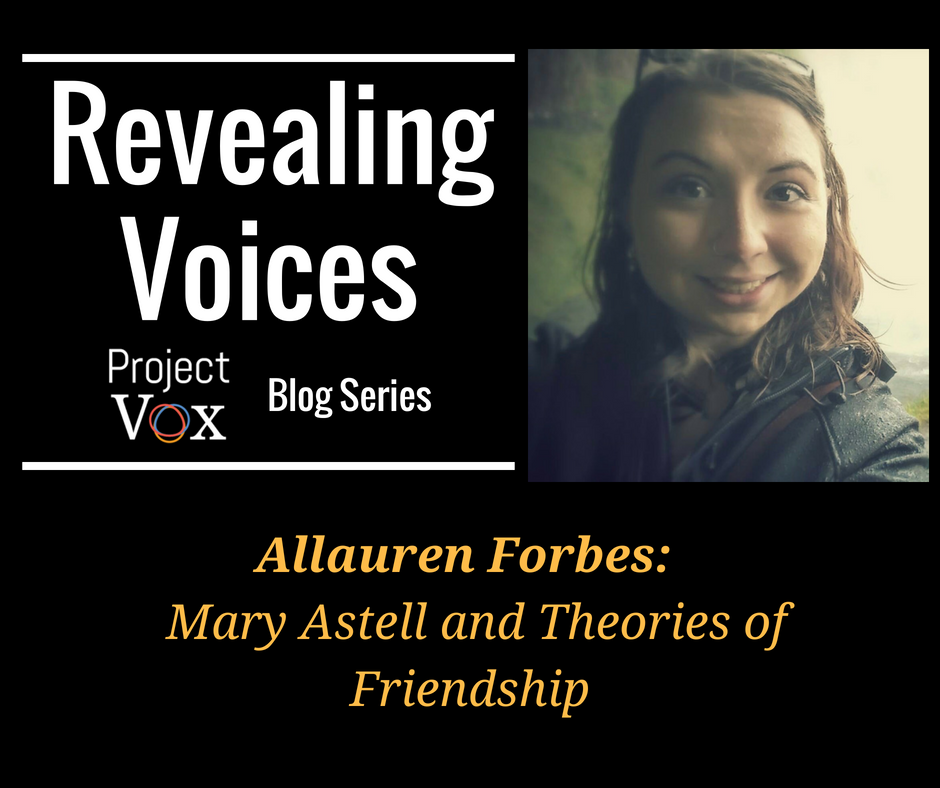 My first experience with early modern women philosophers was Mary Astell’s A Serious Proposal to the Ladies. Once I picked it up, I couldn’t put it down—I immediately fell in love. I was struck by how distinctive Astell’s voice was, despite her clear Cartesian commitments, and how her arguments for women’s education acknowledged a deep kind of intersubjectivity or relationality not often present in her male contemporaries’ views. One feature of the Proposal that captures this is the powerful construct of female friendship.

Astell (1666–1731) takes friendship to be an important part of the cure for the disease of bad custom that plagues women (Proposal, 72).[1] This disease has two main symptoms: first, women have become morally deficient in developing the feminine vices of pride and vanity, and second, women have become intellectually deficient—in forming habits of neglect with respect to serious intellectual matters, their “…minds themselves become as light and frothy as those things they are conversant about” (Proposal, 68). The cumulative effect is that women are vicious, epistemically underdeveloped, and—one might think—unfree in not having chosen to be this way.

Like any disease, though, the patient is not responsible for her affliction: Astell points out that women are systematically deprived of opportunities to learn of any other way of living, and so cannot be fairly blamed. She argues that since women are treated as beautiful objects, it is perfectly understandable that they think of themselves as such. Similarly, being denied formal education, they lack opportunities to develop their intellectual capacities. Her Proposal is meant to improve women’s lives by motivating a single-sexed educational institution where women can become good and wise. This school will provide women with opportunities to form real friendships:

But by Friendship I do not mean anything like those intimacies that are abroad in the world, which are often combinations in evil and at best but insignificant dearnesses; as little resembling true Friendship, as modern Practice does Primitive Christianity. But I intend by it the greatest usefulness, the most refin’d and disinteress’d Benevolence, a love that thinks nothing within the bounds of Power and Duty, too much to do or suffer for its Beloved… (Proposal, 99).

True female friendship supports Astell’s goal for the improvement of women’s lives in two distinct ways. First, it is part of the educational tools within the institution: a key effect of friendship is working toward bettering one’s friend (Proposal, 100). True friends are invested in one’s moral character and will work to correct it when it goes awry. Friendship is also instrumentally effective in improving women’s intellectual or rational capacities. When one joins the institution, the quality of conversation shifts.

You will only quit the Chat of insignificant people for an ingenious Conversation; the froth of flashy Wit for real Wisdom; idle tales for instructive discourses. The deceitful Flatteries of those who under pretence of loving and admiring you, really served their own base ends, for the seasonable Reproofs and wholsom Counsels of your hearty well-wishers and affectionate Friends, which will procure you those perfections your feigned lovers pretended you had, and kept you from obtaining (Proposal, 74).

The second way in which Astell’s account of female friendship supports her goal of improving women’s lives is by gesturing at a kind of relational autonomy that promotes and sustains women’s freedom despite their subordinate social status. Where classical accounts of autonomy depict it as something an individual wins from others, or forges on her own, relational autonomy—first formalized in philosophical literature in the twentieth century—suggests that what it is to be free is to have certain kinds of autonomy-supporting relations to others. Accounts of relational autonomy have been particularly helpful in oppressive social contexts: if autonomy is something one can construct with the support of a sub-community, she can still be free despite autonomy-impairing social relations on a larger scale.

Female friendship seems to operate in just this way. Though women may be unfree on a large scale, they may yet be free in their minds, and one way in which they can maintain this is through the love and recognition of their friends. To be a friend requires a deep acknowledgement of someone else’s goals, interests, desires, and so on—in short, her value and her agency. Even if women out in the world may be trapped in problematic social relations, or troublesome marriages, they can have friends that see them for who and what they truly are, and who will provide the instrumental support necessary to continue to co-construct freedom. In supporting relational autonomy, female friendship offers a kind of vaccine against the autonomy-impairing conditions of bad custom.

Female friendship as a manifestation of an acknowledgement of intersubjectivity and relationality appears in the work of other early modern women philosophers, too.

Madeleine de Scudéry (1607–1701) offers an account of conversation that straddles the boundary between moral and epistemic virtue in her work, On Conversation. True conversation—not what is commonly called such—practices moral virtues and develops intellectual ones. Moreover, proper conversation requires a democratic spirit of equality and kind of sensitivity to and moderation in light of one’s social context that is difficult for women to achieve outside of intimate friendships, for more casual friendships are subject to social pressures that undermine women’s moral and epistemic capacities. Friendship and the conversations possible within it then have the potential to improve women through their relations to others—a radical and perhaps subversive notion.

Mary Wollstonecraft (1759–1797) also discusses female friendship, but in a very different way. In her novel The Wrongs of Woman, or Maria, Maria is locked in an asylum by her dastardly husband. She befriends and eventually falls for a fellow captive, Darnford, and she becomes friends with her warden, Jemima. Maria offers a sharp contrast between the kind of friendship possible between women and that between an eighteenth-century couple—again, illustrating that friendship is one way to examine social relations and their socio-political effects.

Allauren Forbes is a PhD student at the University of Pennsylvania. Her dissertation focuses on theories of friendship and other kinds of relations in early modern philosophy, especially those that appear in the work of early modern women philosophers such as Mary Astell, Madeleine de Scudéry, and Mary Wollstonecraft.