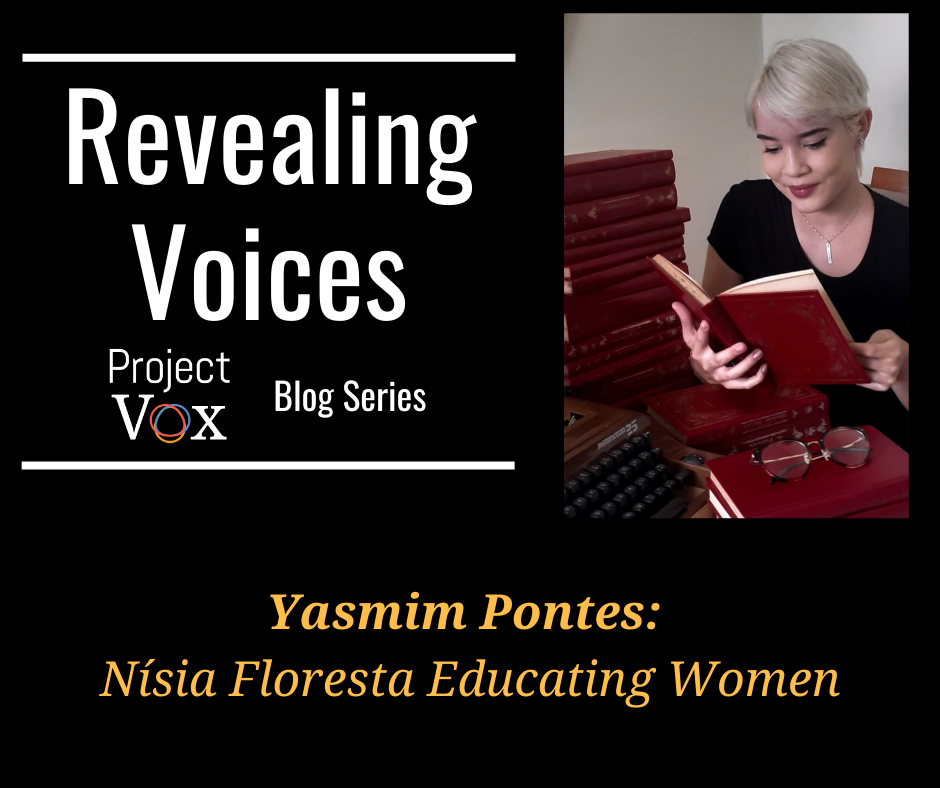 This post marks our first where we include the native language of the contributor or the philosopher. We hope that by featuring multiple languages on our blog, we are able to share these Revealing Voices stories with a wider range of classrooms and audiences. Nicoly Monteiro edited the Portuguese version of this post.

At the end of 2020 I looked for a new advisor, Professor Nastassja Pugliese, to start a new research, as I wasn’t finding myself in my other work. I started doing research in philosophy of education, something totally different from what I had done before. It was a great challenge to talk about the importance of language in education using as a research base the texts of Quintiliano, a 1st-century Latin author, who defended an integral education comprised in the teaching of grammar, theater, music, and philosophy. During this same period, I was invited by Dr. Pugliese to participate in the organizing committee of the event she would coordinate, the III Vozes: Mulheres na História da Filosofia,[1] a multidisciplinary event that was held remotely and aimed to make the study of works by women philosophers visible and collaborate to create a safe academic environment for women of different backgrounds and academic profiles. It was from this event that I consider my inclusion within the academic environment as officially starting, as it was from this conference that I understood the importance of recovering works by female authors. This is also where my current research comes into play.

I don’t remember exactly how I started my studies on Nísia Floresta or why I chose to investigate her work; I think it was so natural that it didn’t have a specific beginning. My advisor studies the author, so the seed had already been planted in me. The study of gender has always interested me and I had already read a few times about Dionísia Gonçalves Pinto, but I didn’t imagine that there was so much controversial information about the author’s life and work. Born in 1810, in Rio Grande do Norte, Floresta was considered, for many years, the translator of Mary Wollstonecraft’s work,  A Vindication of the Rights of Woman (1792). However, in 1995, Maria Lúcia Pallares-Burke in her text “For the freedom of women,” reveals that, in fact Nísia Floresta translated a pamphlet from 1739 entitled “Woman Not Inferior To Man,” attributed by mistake to an anonymous author who uses “Sophie a ‘Person of quality'” as a pseudonym.

According to Pallares-Burke, in her conference presentation for III Vozes: Mulheres na História da Filosofia, the mistake happened because the French translator César Gardeton attributes authorship to the English work he is translating to Mistress Goodwin,  the married name of Mary Wollstonecraft, changing the title from Woman are not Inferior to Man (1739) for Les Droits Des Femmes et L’injustice Des Hommes (1826).[2] Today we know that the thesis that Nísia would have made a “free translation” of Mary’s text is overturned, since Nísia makes a Portuguese version of Gardeton’s French translation of the English Sophia pamphlet and passed on the error as to its authorship.

After understanding a little about this “hole” in Floresta’s career, my first step was to gather and organize information found in library databases, mainly in the Digital Hemeroteca of the Brazilian National Library. I organized a file with at least 30 occurrences of the name Nísia Floresta in 19th-century newspapers. Among these writings, we find a very interesting one: a critique of the school directed by Floresta. She owned and directed a school for girls which, for its time, adopted a progressive curriculum teaching arithmetic, geography, dance, music and foreign languages ​​through the immersion method—a great innovation for the age. Despite its conservative character, the School Law of the Empire (1827) was the first major law that created a basic educational curriculum for the entire country. By assuming a curriculum that broke current conceptions, Nísia suffered attacks in the press:

“Let’s go to D. Manoel Street and take a look at Colégio Augusto, directed by Mrs. Nísia Floresta Augusta. There are educational establishments that have the bad taste of teaching girls how to make dresses or shirts. ‘But it seems that Dona Augusta finds this very prosaic. She teaches them Latin. And why not Greek and Hebrew?’

Poor headmistress! She is so pleased with herself and her college: she is so intimately persuaded that it is the first establishment of instruction in the empire, that it is truly painful to wring out from her such a mild illusion! Calderón said in one of his plays: ‘Will you be surprised by anyone who has never seen the sun to think that the moon is the brightest of the stars? To brag about the dazzling and incomparable splendor of Venus? No.’ It is, therefore, natural that mistress Nísia, who has never seen anything other than her own school, places her above the rest. There is more naiveté in this opinion than vanity. We will only notice Mrs. Floresta who forgets a little of the real purpose of education, which is to acquire useful knowledge, and not to overcome difficulties without any real use.”

The curriculum of her school was considered useless by the local elite. In her book, Opúsculo Humanitário (1853), Floresta recovers the history of the female condition since antiquity and, above all, she writes about the education of girls. There was not only a concern with intellectual education, but also giving “to the body and spirit a degree of strength that is rarely found in sex”[3] (O. H. p. 122). Nísia, as well as other women before her, understand that emancipation can only come through education, but an education that was not limited to “useful skills”—in the case of women, the ability to perform domestic tasks. Understanding that this author was just the starting point of my research made me adopt the following scheme: 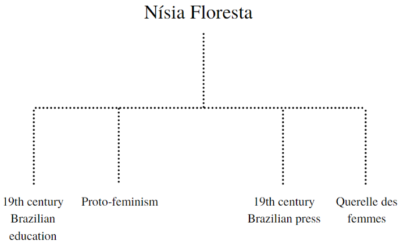 After the first step in cataloging the works of Nísia Floresta, looking for her books and writings in the digital collections, I started to dedicate myself more to 19th-century Brazilian education. What society was Nísia included in? What influenced her writings? Who were her contemporaries?

Girls in the 19th century had their education neglected, those who had some education had a lot of money or were dedicated to clerical life. The School Law of the Empire[4] tried, even if precariously, to change reality, however, with some reservations:

Article 6. Teachers will teach to read, to write, the four operations of arithmetic, practice of brokens, decimals and proportions, the more general notions of practical geometry, the grammar of the national language, and the principles of Christian morals and the doctrine of the Catholic and Roman apostolic religion, in proportion to the understanding of boys; preferring for the readings the Constitution of the Empire and the History of Brazil.

Article 12. Teachers, in addition to what is stated in Article 6, excluding the notions of geometry and limiting the instruction of arithmetic to only its four operations, will also teach the gifts that serve the domestic economy; and those women who, being Brazilian and of recognized honesty, will be appointed by the Presidents in the Council, show themselves with more knowledge in the exams carried out in the form of Article 7.

When comparing the two articles of the law, we see that the girls are at a disadvantage since they do not learn geometry and only the four arithmetic operations, in addition to having their study time reduced with lessons on domestic economy. Despite this fact, the landscape had begun to change, as Pizan says in Le Livre des trois vertus [The Book of Three Virtues] a kind of moral manual for women: “The first great act of rebellion by women was that of wanting to know how to read, and the second, that of learning to read. Because reading is knowing.” Brazilian women, with the democratization of the printing press, started to occupy this media. With their audience formed, newspapers for women—and directed by women—began to have a gigantic circulation in the capital of the Empire, reaching my third research topic. The Opúsculo Humanitário itself, before being printed as a book, were small articles published in the press.

Jornal das Senhoras, for example, had its first publication on January 1, 1852 and promised to contribute to the moral emancipation of women. In its subsequent volumes we can read essays on education and philosophy. The newspaper also brought with it patterns of clothes, music scores, in short, there was an entire educational project in it for the female audience. In the essay entitled “The moral emancipation of women”, Joana Paula Manso writes:

“[…] But let’s stop with these digressions; what is this so called moral emancipation of the woman?

It is the true knowledge of women’s mission in society; it is the just enjoyment of their rights, which man’s brutal selfishness robs from her, and from which she is deserted, because he has material strength in him, and because he has not yet convinced himself that an angel will be more useful to him than a doll. It is a dangerous and terrible enemy for the fulfillment of our desire, man’s selfishness! What is the use of illustrating the woman’s spirit, and abandoning her under the foundations of progress!”

Manso, as Floresta, appropriates this new form of communication to perpetuate female emancipation.

I tried to show that in my research, one topic leads to another, always from the most specific to the most general problem. I start in Nísia Floresta and go through: feminism, education, press and querelle des femmes in Brazil.  Understanding that the production of women is a cycle and that each one leads the other forward is essential for me. I don’t like to say that Nísia Floresta was the first woman to write about feminism in Brazil. I understand the importance of her work, mainly, Direito das Mulheres e Injustiça dos Homens, was a success even though it was published and distributed in a society completely unfavorable to emancipation of woman. I also understand the doors she opened by being one of the first women to publish an admirable amount of works. However, I hope that through research—and investment in public higher education—we will find others before Floresta that have contributed to Brazilian female writing.

[1] The III Voices: Women in the History of Philosophy, took place at UFRJ, and was funded by FAPERJ and had the support of PPGLM-UFRJ, PPGE-UFRJ, the GT Mulheres na História da Filosofia (ANPOF) and the Extending New Narratives project. To have more information about the event, check the YouTube channel with the conference presentations here: https://www.youtube.com/channel/UCVsZCXKEvVKk2Ch1DIfokaw

[2] Although Pallares-Burke discovered that Nísia’s  Diretos was a translation of the Sophia pamphlets, the discovery that the French translator who made the authorship mistake  was made by Botting and Matthews (2014).

Yasmim Pontes is an undergraduate student at the Federal University of Rio de Janeiro. She is scholarship student in undergraduate research project from FAPERJ, with research in the area of literature, feminism, philosophy of education with an emphasis on Brazilian education. She is a member of the research group Outros Clássicos: História da Filosofia e Educação (FE-UFRJ/CNPq) & member of the New Voices on Women in the History of Philosophy (Paderborn University – Germany).