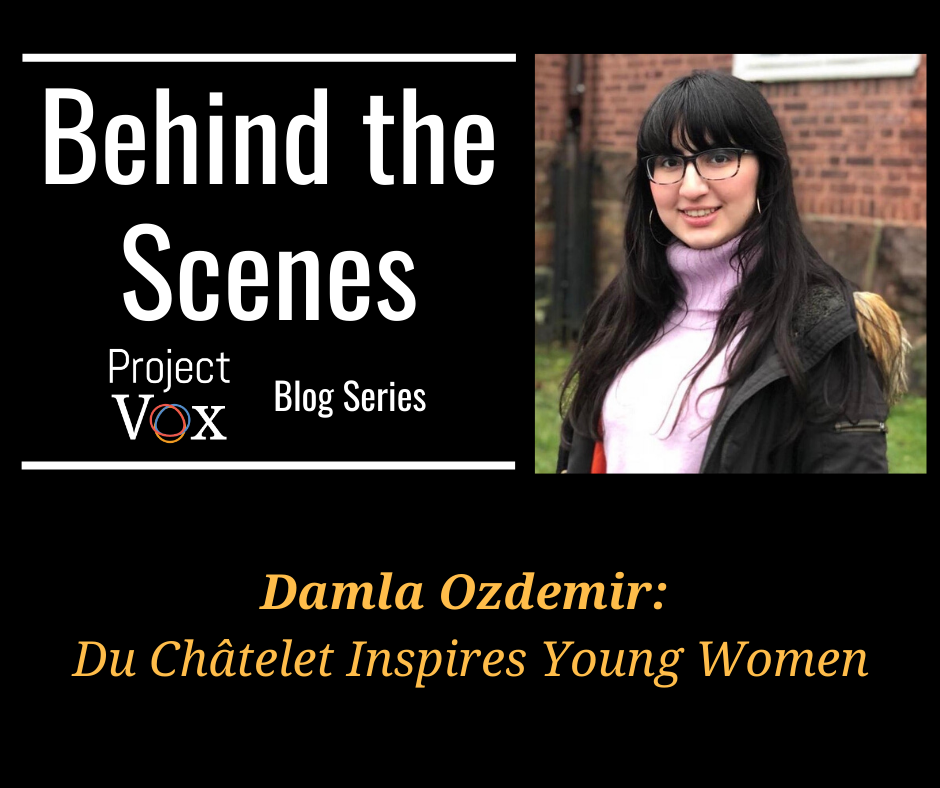 Damla Ozdemir’s post is part of our Behind the Scenes blog series.

Roy Auh: How and when did you learn about Project Vox?

Damla Ozdemir: Around my junior year of high school, I was reading a book about Voltaire because I was interested in physics, philosophy, and history, and found information about Émilie Du Châtelet. I became curious about her, so I did some internet searches and I found Project Vox’s Facebook page. Specifically, I found an announcement that they were publishing a transcription of Du Châtelet’s Essai sur l’Optique.

When I was doing my college search the next year, I kept Duke in mind because of Project Vox. The same month that I was accepted into Duke, Project Vox published a translation of Du Châtelet’s Essai. I wouldn’t say that Project Vox was the main reason I chose Duke for college, but it certainly was on my mind.

Coming to campus, I wanted to know more about Project Vox and philosophy in general, so I reached out to Prof. Andrew Janiak, who invited me to come to one of the team meetings. So, that’s how I’m here!

RA: What was it like to become team member in only your first year in college?

DO: I would be lying if I didn’t say I was intimidated at first. I’d never done any academic research, much less anything of this scale, so I was scared. But Prof. Janiak was super nice the entire time, as was the rest of the team.

At first I didn’t know which position I wanted on the team because, as you know, Project Vox always has a lot of different areas for students to contribute. This year we had three teams of researchers working on Anna Maria van Schurman, Mary Shepherd, and Sor Juana Inéz de la Cruz. I didn’t know what to do, so when I talked to Andrew, he suggested working on Sor Juana with Katherine Owensby because he knew I loved learning about and working with different languages. So, I just jumped in, excited to practice my Spanish by working with untranslated texts. I also got to really bond with Katherine over classics and linguistics! Working with her was very motivating because we were able to learn so much as a sub-team of undergraduate researchers. Also, she really guided and encouraged me throughout the whole process, not just on Project Vox but also about college in general.

RA: What are your thoughts on making the transition from a user of the site to a team member?

DO: I was kind of surprised that most other team members did not know about Project Vox before they began as researchers, because I encountered it multiple times before coming onto the team. For instance, I saw on Tumblr that someone posted about how there have been no women philosophers in the past, and then someone else responded saying to check out Project Vox. They had no affiliation with the team, and from what I could tell, they were a group of teenage girls that are interested in early modern female philosophers.

Maybe I only encountered Project Vox many times because I was interested in physics and the philosophy of science…Du Châtelet is pretty big in those fields. I also heard about Sor Juana in my high school Spanish class. My teacher had a poster of her in the classroom!

RA: Any advice to Project Vox?

DO: I know we are primarily geared toward faculty and researchers, but there are more niche audiences of Project Vox that we aren’t paying as much attention to. Among my friends in high school, there are girls with huge interests in science and philosophy and they really look up to figures like Du Châtelet. Many young women have a huge interest in feminist figures, so spreading the word about Project Vox outside of the academia is a great new direction. Hopefully I can start some of that work this fall!

Damla Ozdemir is an undergraduate planning on studying Computer Science with an Innovation & Entrepreneurship certificate. Mainly, she is interested in the intersections between philosophy and technology, especially in the approaching age of AI. She is currently on the research team for Sor Juana Inés de la Cruz.