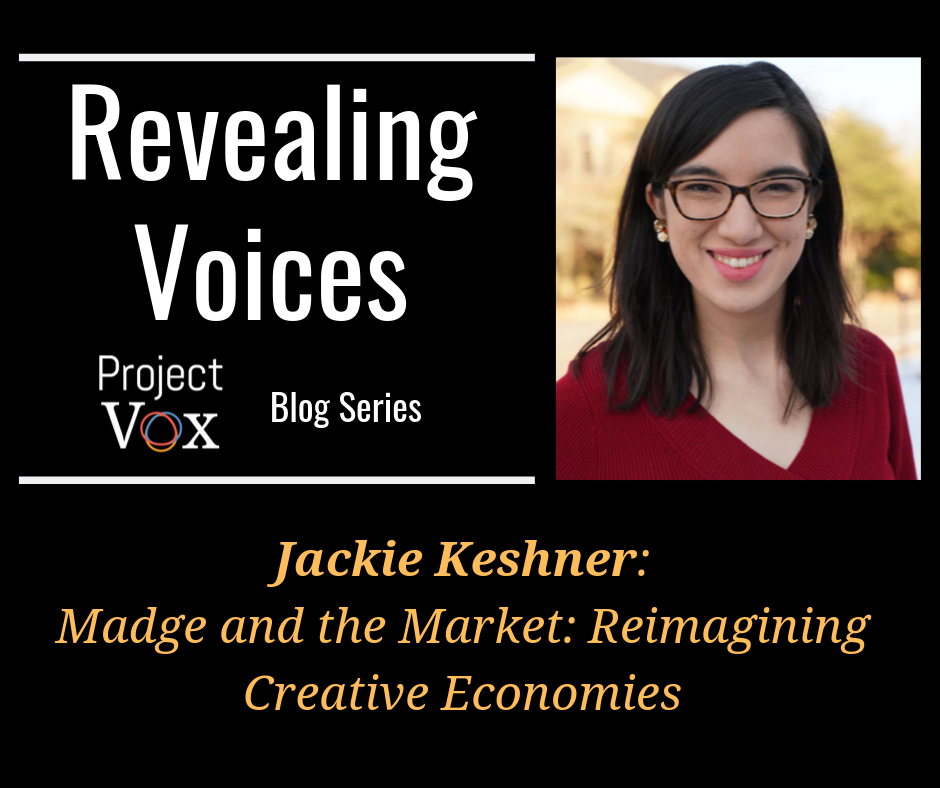 Early modern women writers…and economics. Those were the two topics I sought to connect in my undergraduate English honors thesis. It was an improbable connection, perhaps impossible. Yet, thanks to Margaret Cavendish, I found an in-road.

I chose to study Cavendish’s 1666 science fiction work, The Blazing World, in my thesis, along with two other early modern texts: Ben Jonson’s 1610 play, The Alchemist, and Mary Wroth’s 1621 prose romance, Urania. I encountered all three during a junior year English class, when I noticed that all three texts used market-focused language. As an English major and an Economics minor, I was fascinated by the way profits motivated The Alchemist’s characters, and the way that one female character in Urania refused to be treated like “Marchandise.” Most intriguing of all, however, was the economic landscape of The Blazing World.

Unlike the other authors I studied, Cavendish explicitly described her fictional world’s economy. Her utopia was filled with gold and jewels, yet had no currency; citizens traded by exchanging commodities. Seventeenth-century mercantilism encouraged trade as a way of increasing a nation’s monetary reserves, but the Blazing World had no interest in that goal.

So how—and why—was the world so opulent?

The empress wears items devoid of economic value, rather than precious materials and rich attire, to symbolize her power. Providing a commentary on the foundation of economics, Cavendish suggests that what is considered valuable, whether it is gold or a monarch, is not inherently valuable in itself. Value is placed externally by the interpretative powers of the community at large.[1]

I was transfixed. I had never thought of “value” as something fluid, as a concept an author could redefine for her own purposes. This perspective was understandable for someone writing in early modern England: the nation’s economic, moral, and social values fluctuated rapidly due to inflation and political unrest. In that spirit, Cavendish, by reworking what was considered valuable in her work, created a timely, warped reflection of the world outside of her fiction.

The answer to that was ideas. Those were the precious goods that the Blazing World’s experimental philosophers exchanged freely. Their academic professions are considered “profitable and useful arts” in Cavendish’s world; in fact, even the philosophers’ anthropomorphic forms ensured that they were built for these professions.[2] I began to understand that the production of knowledge, not material commodities, kept the Blazing World running. Cavendish had created a world where creativity and intellect held profit, as well as power.

Ultimately, studying Cavendish’s work through this lens helped me focus my thesis on issues of “circulation and sovereignty” in The Blazing World, Urania, and The Alchemist. I examined the female characters in all three, analyzing how often—and in what context—they had the agency to circulate their own ideas, and how that reflected their authors’ agency to do the same. Both Cavendish and Wroth turned to “fanciful” genres to grant their characters that agency, to help their women escape the gendered literary market barriers that they themselves faced.

English and Economics are two seemingly disparate worlds—one creative, the other empirical. Yet I connect them through their shared interest in understanding human behavior. Economics engages how we live: the choices we make, and the ways we allocate resources. English literature engages why we live, illustrating the lives that our choices—or lack thereof—allow us to lead.

My thesis connected early modern women and economics by rethinking value and choice. Those concepts sprawl beyond literature and economics; as I consider graduate school, I see them as promising first steps towards future research. Cavendish and her female contemporaries redefined value to give themselves more choices. In that sense, early modern women writers not only understood economic philosophy, but also rewrote the rules.

Jackie Keshner recently graduated from the College of William & Mary with a B.A. in English and minors in Economics and Global Business. Her current writing can be found on her blog and her senior thesis can be found here.