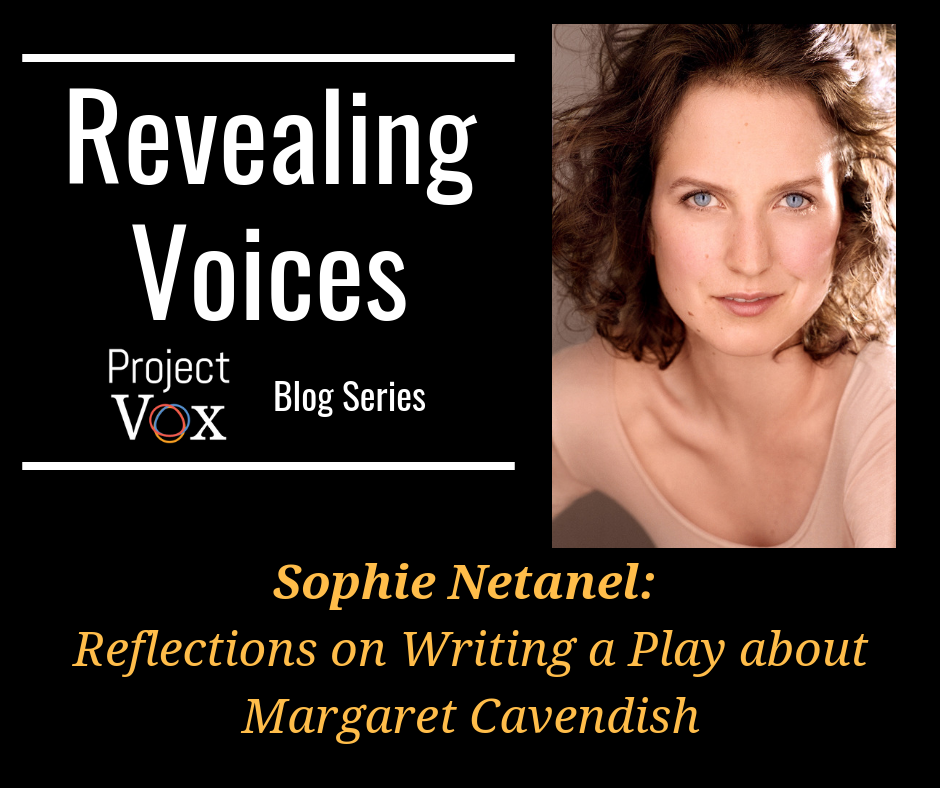 I first encountered Margaret Cavendish in Danielle Dutton’s luminous Margaret the First. I took the book with me on the subway, glued to the pages, until I landed on a couch in my cousin’s apartment in Chelsea. Finishing the book, I announced to her: I will write a play about Margaret Cavendish. And so began my dive into the history of this woman.

Most of my research for my play has been focused on Katie Whitaker’s excellent biography Mad Madge and Margaret’s own writing.

The more I read about Margaret, the more I fell in love with her. She was wild, poetic, whimsical, naive, ambitious, confident. Her work The Blazing World was a fantastical wonderland.  Above all, I admire how, despite her doubts, she always kept developing her work and philosophy.

I wanted to write about a woman who is many things at once. She is the mouse and the lion, the heroine and the fool. She boldly desires to be famous and yet apologizes for her work in the prefaces. She had her own philosophy that contradicted established ideas and yet needed her brother to speak for her in Parliament. So often we see women on stage who are only allowed to be one thing, be it “The Strong Woman” or “The Mother” or “The Temptress.” I want to portray the multitudes that one woman can contain: Margaret moves fluidly through the expected archetypes, never remaining long in one fixed place.

In my play, I decided to capitalize on her proclivity to write about her own life. Here she is the organizer, writer, dramatist, and actor of the play itself. She writes herself into existence. She has the power to redo, speed up, edit, and break the fourth wall. The Margaret of my play is someone I have dreamed into. As a playwright, I have taken the historical Margaret for the skeleton of my play and added the muscle and blood of a fictional imaginary life that has been inspired by her writings. Fantastical elements such as talking bears, general queens, and fever dreams allow me to exemplify her boundless imagination. I did not simply want to write a biographical play, though her life is fascinating in and of itself.  I want to write a play that is a celebration of Margaret’s ideas. Inevitably, in writing a piece of theatre there are choices that are made to move the story along, to make the pieces stitch together and fly forward. The theatrical event makes demands of the characters. I have rooted my play in the events of Margaret’s life and her way of viewing the world. The main relationships of her life (her mother, her siblings, her husband) as well as the people she idolized (Queen Henrietta) play a huge part in my story. There are also fictional characters who serve as foils and examples of the life during that time period. And finally, there are wild imaginings come to life, inspired by her writing, that begin to seep into the narrative.

I am still in the midst of writing and have many questions. What happens when the events of her life become too much for the play to contain? What happens if she loses control of her own story? How do you make her written ideas active and theatrical instead of didactic?

Over the course of the play, the audience may inevitably come to doubt whether or not Margaret is indeed being truthful about the events of her life. She is an unreliable narrator (as maybe we all would be given the chance to tell our own stories). Other characters correct Margaret’s memory or strive to keep her honest when she would much rather skip over the unpleasant bits. There is a negotiation between the characters about why this particular story gets told and the importance of writing and promoting one’s own ideas. One of the fictional characters, Therese, directly challenges Margaret in a break in the narrative: “Why were you so lucky? Why do you get your own play?” Margaret answers, “I wrote.” And while this may seem flippant, I believe it to be the crux of why I was drawn to Margaret. In The Blazing World she says,

I am not covetous, but as ambitious as ever any of my sex was, is, or can be; which makes, that though I cannot be Henry the Fifth, or Charles the Second, yet I endeavour to be Margaret the First; and although I have neither power, time, nor occasion to conquer the world as Alexander and Caesar did; yet rather than not be mistress of one, since Fortune and Fates would give me none, I have made a world of my own; for which nobody, I hope, will blame me, since it is in everyone’s power to do the like.

Margaret believed that not only did she have the power to create her own world, but so did everyone else. I want to highlight the beauty in this thought—we are all able to create a new world. We just have to go out there and do it.

Sophie Netanel is an actor and writer in New York City. Her work has been featured in the SheNYC Arts Festival, the Providence Fringe Festival, and in the Writing is Live Festival. She has a BA and MFA from Brown University.