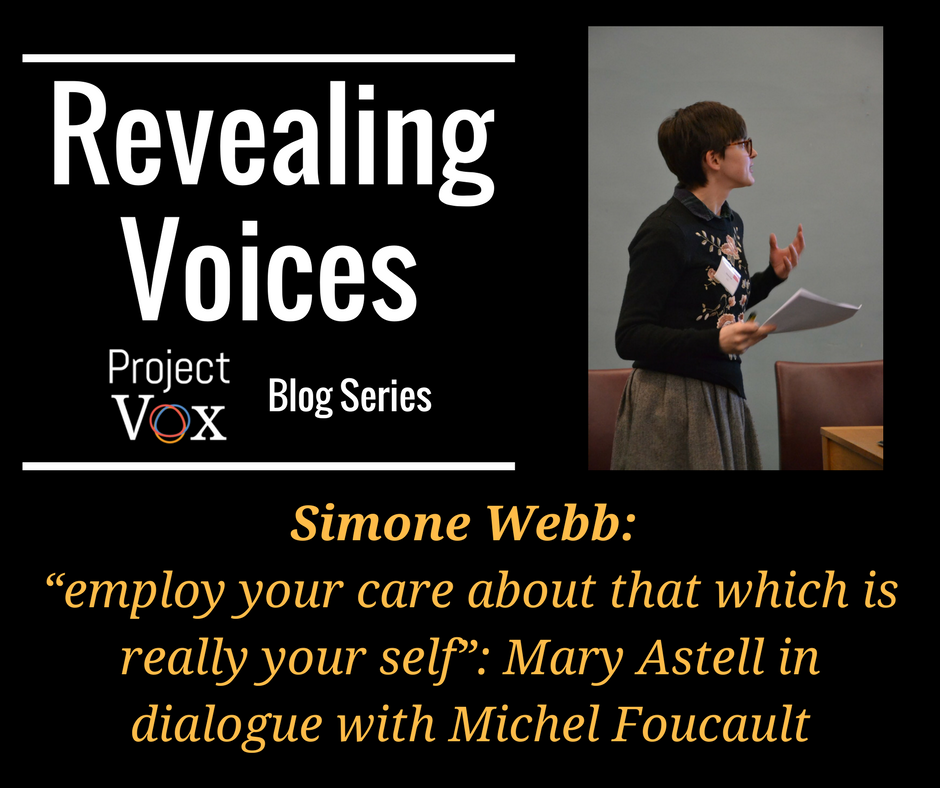 Mary Astell’s (1666-1731) treatise A Serious Proposal to the Ladies (1694, 1697) has been analysed as utopian literature, a proto-feminist text, a philosophical work in which we can find Astell’s contributions to virtue theory and epistemology, and as an extended piece of rhetoric. These are all fascinating and valuable readings. But a perspective on Astell which hasn’t been considered is the relationship between A Serious Proposal and the late thought of Michel Foucault (1926-1984). Bringing Astell and Foucault into dialogue provides unique insights on both thinkers’ work.

Foucault is probably best known for his work on power and knowledge, particularly in relation to sexuality, madness and punishment. In his later work, however, he turned to the constitution of the ethical subject, particularly in relation to ancient philosophy. On Foucault’s reading of ancient texts, particularly the Stoics’, philosophy used to be a set of practices and disciplines aimed at the “care of the self”, not a set of arguments to obtain the truth. Ancient philosophy, he argues, was not separable from “spirituality” – the idea that “for the subject to have right of access to the truth he must be changed, transformed, shifted” (Foucault 2005, 15). This transformation takes place in a “long labor of ascesis” (16), and once it has been achieved, the now-accessible truth will further transform the subject. The work on the self by the self, for the ancients at least, achieves emotional tranquillity and self-mastery. While his analysis stems from ancient philosophy, Foucault indicated interest in re-establishing a cultivation of the self for the present day, also identifying some “spiritual” philosophical practices throughout philosophy’s history. 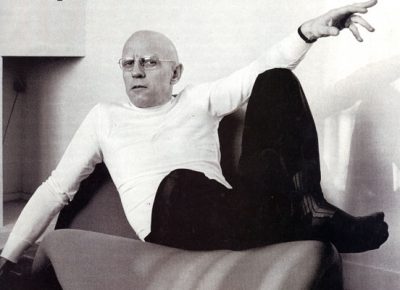 A Serious Proposal repeatedly exhorts women to the care of the self, a phrase Foucault pays considerable attention to elaborating. Astell advises her reader to “employ your care about that which is really your self” (SP, 53), referring later to the woman who “chiefly attends the one thing needful, the good part which shall not be taken from her” (112). Astell’s Proposal, like Foucault’s ancient Stoic texts, highlights the necessity of work on the self – there “goes a good deal of Time and Pains, of Thought and Watchfulness to the rooting out of ill-habits” (141). Foucault doesn’t challenge the assumptions in his ancient texts that the selves undertaking this work will be men. Astell’s care of the self, however, is explicitly aimed at women, whose selves are warped by custom, ignorance and poor education. Women are “taught to value [themselves] on nothing but [their] Cloaths” (SP, 69) and other superficialities, leading to an undue concern with bodily accoutrements as opposed to their genuine selves. While men also need self-cultivation and development, Astell’s stance is that women require it far more – and, worse, aren’t taught how undertake such a project.

And it’s the means to undertake care of the self that Astell spends the bulk of A Serious Proposal setting out. She advises readers on an intellectual and moral regimen to be undertaken by each woman. This involves what Foucault would term practices of the self – exercises directed at self-cultivation. Key among such exercises for Astell is philosophical meditation, or contemplation of rational arguments. Reading A Serious Proposal this way reveals that the philosophical arguments Astell presents are not inert: they are intended to contribute to the transformation of the female reader’s self. In a long passage, she writes “did we consider what we Are, that Humane nature consists in the Union of a Rational Soul with a Mortal Body […] we shou’d not be long in discerning the good effects.” (SP, 210) The purpose of following arguments for the distinction between mind and body isn’t to establish the fact for its own sake – but to alter women’s attitude towards their selves and our bodies, to affect their mode of existing in the world. Astell also suggests that for women’s complete transformation, “perhaps it will be necessary to apply to the body as well as to the Mind” (161); such somatic practices have also been identified in ancient philosophy. Other practices of the self mentioned by Astell include reading, discoursing, and “at night […] review[ing] the Actions of the Day” (87). This latter exercise is one of the best-known of ancient philosophy, famously recounted by Seneca.

The end-goal of Astell’s programme is the creation of a coherent and rational subject. Women start off with an “unthinking, considerate Mind, one that lives at Random without any design or end” (93). This is like stultitia, a condition Foucault describes from Seneca’s writing – “the mental restlessness and irresolution with which we are naturally afflicted” (Foucault 2005, 130). Someone with stultitia is “dispersed over time” (131) and “constantly changing his way of life” (132). Astell likewise refers to a woman’s life before undertaking her exercises as “a confused huddle of broken, contradictory Actions” (SP, 142). Afterwards, she will gain self-knowledge, regulation of her will and passions, and tranquil joy. Women on Astell’s course of self-care will “be absolute Monarchs in [their] own Bosoms” (234). By engaging in work on the self, they will free themselves from the destructive effect their gendered positioning has had on their subjectivity and be liberated from internal oppression.

By reading Astell in this way, we can correct Foucault’s lack of attention to the specific position of women caring for their selves, and furthermore draw on A Serious Proposal as a set of potential tools to adapt for feminist praxis today. A Serious Proposal shows how women in particular stand in need of self-cultivation, and how philosophical exercises can assist the work of the self on the self, liberating women from the internalised effects of misogyny. Many of Astell’s comments on women’s condition in her own time ring sadly true in the twenty-first century. Her regimen for addressing this could, perhaps, prove similarly relevant.

Simone Webb is a PhD student in Gender Studies at University College London. Her research applies frameworks of philosophy as “a way of life” and practices of self-cultivation to early modern women philosophers – primarily Damaris Masham, Mary Astell and Catharine Trotter Cockburn. She’s drawing on Foucault, Pierre Hadot and Martha Nussbaum to consider what light the early modern writers can shed on the relationship between gender and philosophical work on the self. She can be found on twitter @SimoneWebbUCL.

Hadot, P. (1995) Philosophy as a Way of Life: Spiritual Exercises from Socrates to Foucault. Edited by A. I. Davidson. Malden, MA; Oxford: Blackwell.